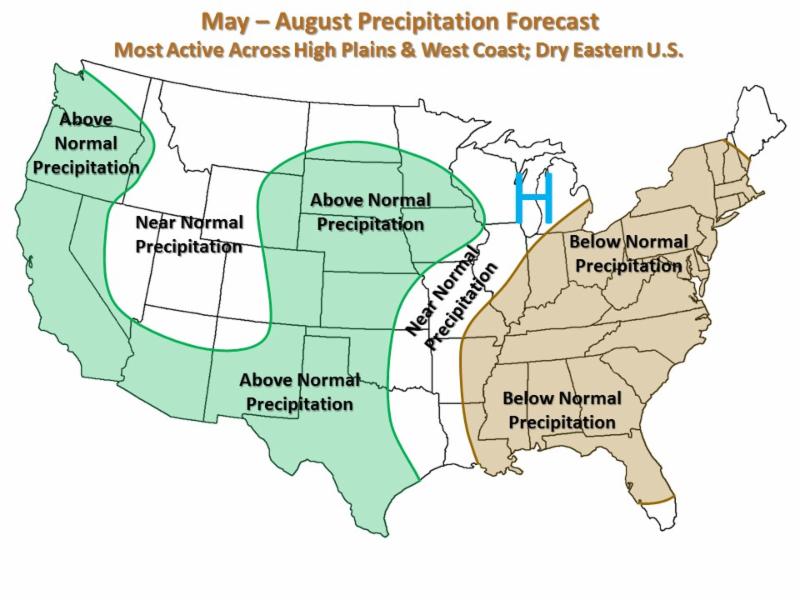 The ongoing El Niño will weaken considerably over the next several months. This trend will likely be the strongest long-term forecast signal of the 2016 summer.  Abnormally warm water still exists in the eastern Pacific Ocean and along the West Coast. This combination creates the heat in the Central  Plains.
There is high confidence this summer will be warmer than normal and probably the warmest since 2012.  The sea surface temperature setup favors a persistent upper level ridge centered over the upper Midwest and Great Lakes region. This setup will block Canadian cold air from making its way into the United States. 90s and 100s should be much more common this summer than the past two summers! Near to below normal temperatures should be limited to areas from the Southwest U.S. to Texas.
The greatest uncertainty comes with the precipitation forecast. Systems during the warm season like to travel along the edge of the high pressure ridge, not through it. So where the ridge lives most of the summer is key. If the ridge centers more often over Illinois, then we will be drier as systems are forced to stay west of the area. If the ridge is centered near Lower Michigan, systems will have a better chance to make it into our area. There are signs this ridge may begin the summer further east/northeast, then retrograde westward into Iowa for the end of the summer. This means May-June should be wetter than July-August.
Drought conditions and soil moisture are also key for summer precipitation patterns. Those that start dry tend to stay dry through summer while those that start wet tend to stay wet (comparatively) and cool. While drought conditions were beginning to develop across portions of the Plains in March and early April, recent rains have reversed that trend. The forecast pattern over the next 2-3 week is supportive of additional rains, but likely not excessive on a widespread basis.  The potential for an excessively dry summer (like 2012 and 1988) appears to be decreasing because of  the recent rain. The relatively saturated soils should aid in keeping drought conditions at bay through at least June. Thereafter, the high pressure ridge should gradually become more dominant during July, causing rains to become less frequent and possibly a return to drought conditions by August or September.
The primary factors we looked at when searching for similar years (analogs), were those that featured a strong El Niño during the winter weakening to a La Niña by fall. This search yielded the following analogs correlating respectively: 1998, 1988, 1983, 2007, 2010.